I was born in the 80s and grew up in the 90s. So I drank Panda Pops, rented videos from a shop, and owned more than one shell suit.

I went to a private primary school, only because my dad got my little brother and I in for half price as he was a teacher there. 😄

There's Nothing Left to Lose by the Foo Fighters

After nailing my 11 plus exams I went to Stretford Grammar. I trundled through Longford park every morning come rain or snow, and my favourite subjects were music, art, and IT.

In the noughties I miss-spent my youth in alternative night clubs, playing in bands, and having stupid hair. To be fair I still do some of this now just not nearly as often.

We live in Manchester in the UK, a thriving tech hub and the unofficial capital of England.

I live with my girlfriend, our baby daughter, my three other kids, and our Shih Tzhu Phoebe. 🧔👩👦👦👧👶🐶 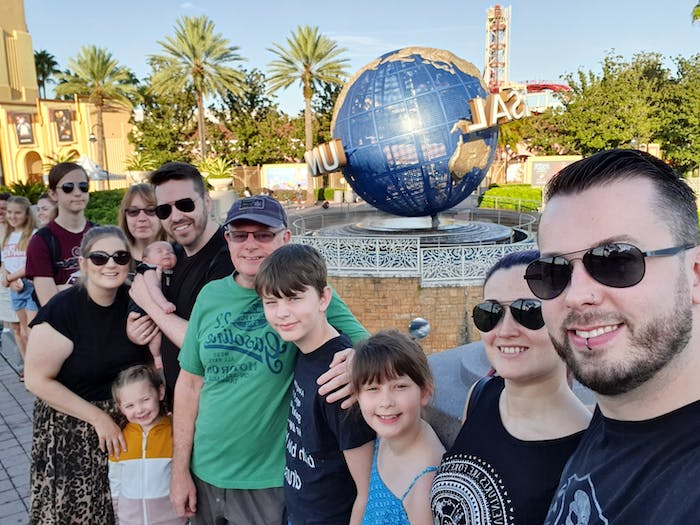 Here's a photo of most of us on holiday in Universal Studios Orlando.

How I became a designer

When I left school I had no idea what I wanted to do. To give myself as many options as possible I took Biology, Physics, Chemistry, and Maths in college. 🧠

That did NOT go well.

After just two weeks I knew I'd made a huge mistake. And while I was capable, my heart wasn't in it.

So I picked up some retail work at Maplin Electronics while I figured out what I wanted to do.

It was at that moment, I knew I wanted to be a web designer.

I'd enjoyed playing with PCs since I was little. So I started down a career in IT working in a computer shop for a while, then went into IT support for littlewoods.

At littlewoods I worked closely with the marketing and web design teams and realised there were many ways to be creative. It was at that moment, I knew I wanted to be a web designer.

I enrolled at night school right away to get my qualified, and the rest is history.

Read about my career since in my CV.

What I'm Listening To